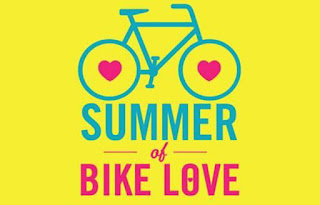 Nice weather brought some 250+ riders out for our last ride.  The theme was "Summer Mixer" whatever the hell that means.  Individual interpretations were good though.  Lots dressed up.  Eich's had the alley open and beer was flowing.  Trike-a-boom provided tunes.  It was the longest day of the year, and I had a feeling that no one really wanted to leave.  It wasn't really dark and everyone seemed to be having such a good time.  But ride we must.

Due to some conflicting schedules, the ride route was put together by a couple of very loyal FBC Lifetime Members for Life.  Thanks to them for that.  We did a long alley in South Sand that we had never done before.  It was a little wild.  But hey, no one said it would be easy.  After zigzagging around South Sand we ended at the 219er.

Now, the 219er is an awesome place to end on a summer's day.  Even though the weather was good, they had a large tent up covering the patio just in case.  The outside bar was pouring.  There was a DJ and dancing.  It was more good times.  Huge thanks to Glenn and the 219er crew for the awesome night.