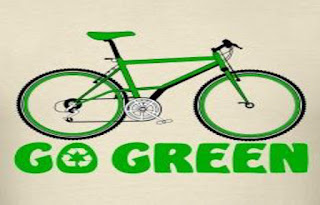 120+ riders showed up at Eich's for our last ride. We were headed somewhere FBC Sandpoint had never been before. It was promised it would be grand. The anticipation was so thick you could cut it with a knife. Where would we end the ride? Many had ideas. But in the end NO ONE could predict our fate.

Anyways, it was Earth Day and "green" was the theme.  Because, how much more green could you get then riding your bike from point A to point B? (I realize I am posing a lot of questions, and cannot hear your response through the computer screen).  We rode through an alley we have never done before either...there were a couple mishaps.  There was also some rain.  We kept the ride a little shorter because of that.

We ended at the back entrance to the Little Panida.  Entrance was free for us FBCers.  They arranged to show 12 short film from the Portland Bike Film Fest.  The films were eclectic.  There was beer, wine and snacks.  I must say that Patricia, Becky and the rest of the Panida volunteers did an amazing job for us.  A huge thanks goes out to them for inviting us there and taking the time to make everything so fine.  All the money for alcohol went to the Panida.  We also donated all of the evening’s spoke card money to them.  So, in effect our ride was a fundraiser...if you didn't know the Panida is a non-profit, made possible by donations and volunteers.