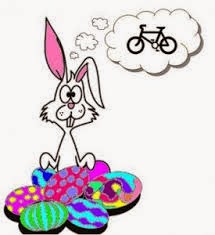 OK, so let's see here.  I made some notes for the evening.  It really helps.  My grandpa was right.  We had 110+ riders show up for our Easter themed ride.  Eich's was packed to the brim.  They might need to start opening up the alley again.

We had riders show up from Colville, Lewiston, Victor and CDA.  The trike-a-boom made it's return for the summer.  We had lots and lots of people dressed up with bunny gear, baskets and other weird shit I didn't understand...but, hey, thanks for participating anyway.

We left Eich's and cruised on over to the Lakeview Park where we did a Easter eggs hunt, FBC style.  There were dozens and dozens of plastic eggs with reflective tape spread around the field of the park.  Some were filled with some really cool stuff, like gift certificates, earrings, lights, cool valve caps and stickers.  And then there were some with candy...of course.  Watching some 100 grown people running around the field in the dark looking for little eggs is, well one of the most entertaining things I have seen.  We haven't done the egg hunt in a few years, so it was a nice recurrence.

After the egg hunt, we cruised down to the boat launch where the moon was just too big and beautiful to not stop and do a group photo.  Damn, good idea but less than stellar results.  We left.

We ended at the Neighborhood Pub.  A first for them.  Thanks to Magnus, John and crew for working their asses off and being very understanding.  We had a good time there.  Although there was a photo bombing bunny who got rather inappropriate.  Some of you may not look at bunnies the same way anymore.