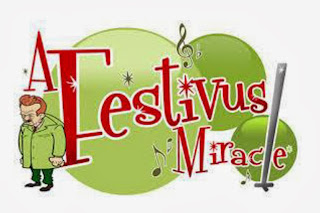 It was a Festivus Miracle that the weather held and we had a great night for a ride.

People showed up at Eichs dressed in their Christmas best...or worst.  Most all came with wrapped presents.

We hydrated, met some original members of FBC Spokane, checked out each others Christmas sweaters, bragged about whose gift was gonna be better, greeted some new Lifetime Members for Life and took cold medicine (or at least I did).

We left Eichs, did a rather long loop through South Sand and by some of the more decorated houses in the area.  It was a treat and riders rang their bells in affirmation.  We came back downtown and did a lap around the round-about at City Beach.  We then arrived at Bricks and Barley for our final destination.  They were not scheduled to be open that night, BUT the girls lite up the OPEN sign, fired up the pizza oven, started a fire in the pit on the back patio, slung cold brews, played Christmas music and in general made everyone feel at home.  As a side note, I think this establishment might have the biggest ratio of FBC Lifetime Members for Life out of any other in town...although I didn't actually run the numbers.

There was a Festivus pole made out of differing beer cans, which in case you did not know, are made out of aluminum.  We may not have strictly adhered to the Festivus pole guidelines, but hey, we couldn't find an aluminum pole and in the end we made it our way, the FBC Sandpoint way.  So, there.  Anyway, people placed their finely wrapped gifts around the Festivus pole for the exchange later in the eve.

Oh yeah, so then later in the eve after some other stuff, we had our second annual FBC Sandpoint Gift Exchange.  There were some good gifts, some bad gifts, some interesting gifts and some what the hell gifts.  It was fun.  A special thanks to Lifetime Members for Life Dick and Linda for the Full Moon, glow in the dark clock.

We bid a good night to the wonderful staff and went out into the night.