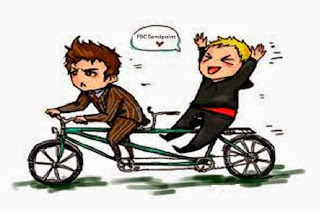 Fred and Wilma, a couple Things, Duck Dynasty bros, Wayne and Garth, Superheroes, Scrabble Pieces, Mike Tyson and his lion, a "Samich," Blood and Crip, Vikings...these are some of the couples/pairings that I saw at our last ride.  You FBCers never cease to amaze.

Some 115 riders packed Eich's on a non-school night.  A word on our monthly rider numbers.  Our official FBC Sandpoint count is always done by FBC Lifetime Member for Life J-Rad.  Now she was some sort of savant in 1st grade and her counting skills are second to none.  In addition, she does not drink.  Therefore, she is the best and most reliable person for this job...I've seen some of you others try.  Anyway, back to the ride...

Our sickeningly cute, sweet and lovey couple, that by the way was getting hitched the next day, was on hand for the ride.  They also brought several out of town family members.  Just think, you all will be in someone's family album.

So, we all left Eich's and made our way to the City Beach.  There we did a lap in the round about and then headed down the Sandcreek Path.  We went through the Field of Nightmares, down Hwy 200 for a short jaunt and ended at the Hideaway Lounge.  This Sandpoint staple is not known by many, and therefore, many have never visited it.  So, it was a treat.  Amber and her crew worked like crazy to tend to everyone.  They had the back door open and it was a great night to be outside looking up at the moon.  Weather and viewing conditions really could not have been much better.

Our FBC Sandpoint Best Dressed judges had a real hard time this month.  Ultimately, 2nd place went to the Things and 1st place awards went to Fred and Wilma.

NOTE: FOOD DRIVE ON OUR NEXT RIDE, START COLLECTING...MORE DETS TO COME
Posted by B-Railer