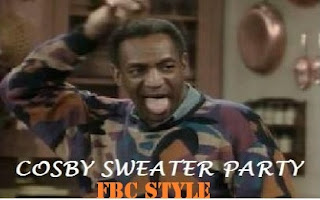 Facebook how I loathe you...and then I kinda love you.  It appears that just maybe, and I really hate to shower too much praise here as our new facebook page is having an impact on our ride numbers...

People showed up at Eich's with a good representation of sweaters.  Some seemingly right off the Cosby set.  Others off some store rack where they should have never left.  And then there was an Easter bunny and a bunny helper.  They had basket full of eggs with surprises inside for everyone.  Damn you kids are creative.

Anyhow, people kept showing up and I ran out of spoke cards.  I will leave a note at the FBC Sandpoint Headquarters to make more cards next time.  You should make a note to bring a dollar and get there early if you wanna ensure you get one.

So, let's see, we left Eich's about 35ish strong.  We rode through West Sand, by the health club, through a round about (several times), down through South Sand, through a dark and musky alley and finally arrived at the Hydra.  Thanks to Abbey, Shelly and a third, just as awesome server with a name that escapes me, for taking care of our thirsty crew and staying open a lot later than normal.  Laughing Dog was flowing and good times were had.  FBC Lifetime Member for Life Jane did a bike count shortly after arriving and came up with 52.  So, 35 riders divided by 52, carry the 3, subtract 8...and we had some sort of security breach I guess.  But who cares, thanks to all that showed up.  52 bikes lined up along both sides of the street was very impressive.

In conclusion, the moon did finally make a grand appearance.  Cosby Jello prizes were awarded to best dressed members Angela, Marty, Dave and Michael.  Finally, Larson's donated a sweet apocalypse type knife/tool kit that went to new FBC Lifetime Member for Life Mac...who by the way is riding from Sandpoint to Prudhoe Bay, Alaska this June to raise money for the Sandpoint Food Bank (www.PointToBay.com)...hopefully he won't need it.