I hope by now people are starting to get the hang of this.  We post a ride, you show up, ride and have fun and then we post a recap.  Easy.

Everyone has liked the spoke cards and design work done for FBC Sandpoint...I agree.  Many, many thanks to FBC Lifetime Member for Life Al for all his creativity and time.  Don't forget to budget a dollar for the night to get your commemorative spoke card.

Next ride is NOT on a school night!

I hear the Easter Bunny will be paying a visit and spreading some special FBC Sandpoint eggs.  So, maybe a little egg hunt during the ride...bring your basket.

We have another cool route through town planned.  As the weather gets nicer, we'll make the routes a little longer.  But I've heard all the crying about not being in bike shape yet.  Blah, blah...these rides are social and easy cruises. 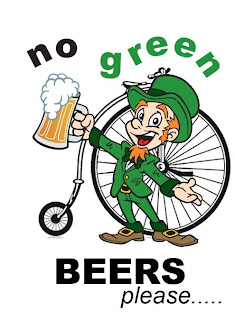 The stars were in alignment as this Full Moon Fiasco coincided with dollar beers and live music at Eich's.  Sounds good on paper.  And it was.  But it was packed with barely standing room.  The dollar beer keg was flushed in 40min and the FBC left 5min later.
In all the chaos it was hard to determine who was there for dollar beers, love of live music, just cause they enjoy Eich's or because they wanted to join in the Full Moon Fiasco.  Hopefully, we didn't leave many behind.  Founding FBC Sandpoint Lifetime Member for Life Chris was one such causality however...he did catch up with us at La Rosa.

I also noted that some were rather antsy to hit the road and kept asking when we could leave.  Reminder: this a casual event, but if your mind revolves around strict rules let's say all future rides will leave around 46ish minutes after the meet time (for the time challenged that's around 8:46ish pm).

More importantly, the moon and the ride were awesome.  Our group of 20ish riders did a nice route through South Sand that included a stroll along the lake with some great views.  We stopped at Grandpa L's house midride as someone had left a case of PBRs for us thirsty riders.  Beers on the patio looking at the moon on full display were had.  Awesome!

Mounting our bikes to head to our final destination, La Rosa, I noticed I had a flat front tire.  Guess I didn't quite clear the curb.  Not to be deterred from our goal, I charged the group on regardless.  La Rosa was waiting with drink specials and Rob took great care of everyone.

"Best Dressed" was easy as Lifetime Member for Life Naomi went all out for the St. Paddy's day theme!  She received what else?  A pair of green socks from Sock Guy.

Thanks to one of our FBC Lifetime Members for Life, we now have a cool little hand flyer for you to print and distribute.  See you Thursday... 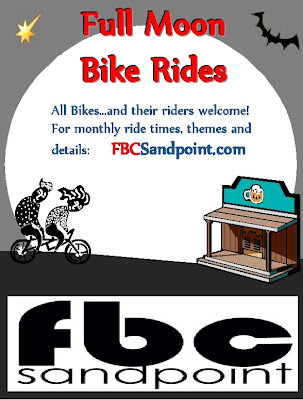